IMF Will Not Provide More Financial Aid For Greek

According to Frankfurter Allgemeine Zeitung it is almost sure that the IMF will not be able to continue to pay for Greece after June 29 and that three options are being discussed, one of which – the bankruptcy of Greece – is wanted by no one.

“It is our understanding that the EU is currently considering alternative options of a private sector involvement than a maturity transformation – which would trigger ratings downgrades and possibly a loss of access to ECB financing.”

The second option is to use the Commission’s EFSM to take over the billions the IMF would have paid for otherwise. The advantage would be, from Angela Merkel‘s point of view, that it involves no votes of national parliaments.

A third option would be another adjustment program with yet more conditionality attached to it.

The article says the latter is option will be discussed at a technical level in Brussels today, but no immediate decisions are expected.

It is far from certain that Merkel will get a majority for that in Bundestag for such a package. And there remains the disagreement whether any such package should be accompanied by a private sector involvement.

The Wall Street Journal’s reports from Berlin that Germany is considering dropping its push for an early rescheduling of Greek debt.

The article quote unnamed officials in Berlin who express hope that a deal could be reached with Athens to render this step unnecessary.

Financial Times Deutschland, by contrast, reports that some central banks no longer exclude a voluntary restructuring – provided it does not trigger a negative chain reaction on the markets.

It seems like the conflicting news reports somewhat reflect the confusion that currently reigns in European capitals, as the system finds it, once again, hard to cope with actual crisis management, eurointelligence.com points out.

“It is our understanding that the EU is currently considering alternative options of a private sector involvement than a maturity transformation – which would trigger ratings downgrades and possibly a loss of access to ECB financing.”

Meanwhile, European leaders seem to have agreed that Greece can cut its VAT rate from 23% to 20% in a move designed to win support for the new austerity package from opposition parties.

But Greece’s conservative opposition party said on Tuesday that a VAT cut was not enough to win its support, Reuters reports.

An official at the new Democracy Party says: “If correct, it is a good step but not good enough, not sufficient to restart the economy…The corporate tax and personal income tax cuts we suggested would have more impact, less cost and no immediate cash flow impact.”

The VAT deal is not confirmed yet, and the so-called “troika” is expected to complete its mission to Athens late this week and then produce its review of the government’s progress towards meeting its deficit targets.

German Handelsblatt writes that the Greek have warmed to the idea of creating an independent Treuhand charged with implementing the privatization program. While the principle of this idea seems to be agreed it is still unclear if the representatives of the EU, the ECB or the IMF will be directly involved in this.

About 50,000 people gathered in central Athens, in a seventh consecutive day of anti-austerity protests.

Banging cooking pots, protesters held a banner in front of parliament reading: “We won’t go away until the government, the troika and the debt leave.”

Last night in Athens, a trickle of protesters stopped the traffic outside parliament building on Syntagma Square. Less than an hour later they were numbered in their thousands, chanting “thieves, thieves, thieves”.

A UK court ordered that WikiLeaks founder Julian Assange be extradited to Sweden to face questioning about sexual-assault allegations, dealing a serious blow to the document-leaking site and its founder. An extrade to Sweden might result in Mr. Assange ending up at Guantanamo Bay, his laywers says. 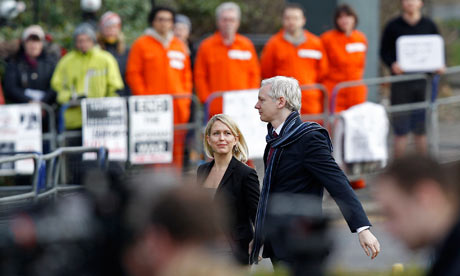 The decision means that Mr. Assange’s efforts to build and promote WikiLeaks will be detoured to some degree in coming months by the possibility that he will face criminal sex charges. WikiLeaks has gained notoriety with governments around the world through its release of thousands of classified documents and diplomatic cables, the Wall Street Journal writes.

On Thursday afternoon, the judge released Mr. Assange on the same bail conditions he has been living under since December, which require him to wear an electronic monitoring tag, report to police every day and live at a supporter’s estate northeast of London, where he must abide by a curfew.

WikiLeaks is already struggling with a number of problems, which could intensify as Mr. Assange is distracted by his legal saga.

Arguing against his extradition, Mr. Assange’s lawyers said he wouldn’t get a fair trial in Sweden, where they say he has been vilified in the press.

They say Mr. Assange tried to meet with Swedish prosecutors several times before leaving Sweden, but was rebuffed.

They also argued that the sexual offenses alleged don’t rise to a level that merit extradition proceedings in the UK.

But the UK court said it appeared possible that Mr. Assange had tried to evade questioning while he was in Sweden. Judge Howard Riddle called all four alleged offenses extraditable, and says he was confident Mr. Assange would receive a fair trial in Sweden if he is charged.

At one point, Mr. Assange’s lawyers published their defense strategy online, including several paragraphs about how he shouldn’t be extradited to Sweden because there was a “real risk” he would then be extradited or “illegally rendered” to the US,  where his lawyers argued he could face the death penalty or imprisonment at Guantanamo Bay.

The company that runs the Nasdaq stock market said Saturday that hackers had penetrated a service that handles confidential communications between public companies and their boards, The Seattle Times reports.  The service run by Nasdaq OMX Group Inc. carries strategic information for about 300 companies.

However, the company in question says it appears no customer data was compromised. Nasdaq OMX says the hacking attempts did not affect its trading systems. Nasdaq is the largest electronic securities trading market in the US with more than 2.800 listed companies.

The targeted application, Directors Desk, is designed to make it easier for companies to share documents with directors between scheduled board meetings.

It also allows online discussions and Web conferencing within a board.

Since board directors have access to information at the highest level of a company, penetrating the service could be of great value for insider trading, The Seattle Times writes.

A federal official tells The Associated Press that the hackers broke into the systems repeatedly over more than a year.

Investigators are trying to identify the hackers, the official says. But still they have no clue about  motive.

The official spoke on condition of anonymity because the inquiry by the FBI and Secret Service is continuing.

Nasdaq OMX spokesman Frank DeMaria says the Justice Department requested that the company keep silent about the intrusion until at least Feb. 14.

However, The Wall Street Journal reported the investigation on its website late Friday, prompting Nasdaq to issue a statement and notify its customers.

It pulled in forensic firms and federal law enforcement for an investigation, but found no evidence that any customer information was accessed by hackers.

Nasdaq acquired the company behind Directors Desk in 2007.

In 1999, hackers infiltrated the websites of Nasdaq and the American Stock Exchange leaving taunting messages, but Nasdaq officials also then claimed said that there was no evidence the break-ins affected financial data.

And if your interested in a little bit of extra information

“The Complete History of Hacking”