It’s not only the sun that’s heating up, so are the volcanic activity at Iceland. According to the Modern Survival Blog, ash could begin to reach parts of Scotland as early as Tuesday followed by Britain, France, and Spain while a powerful Icelandic volcano named Grimsfjall (“Grimsvotn”) continues to erupt there at the Vatnajökull ice cap – Europe’s largest glacier.

“First estimations show this is 10 times larger than the 2004 eruption.” 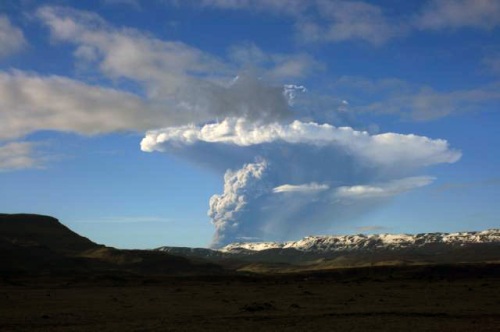 One observer says, “There was no warning at all…approximately 20 minutes from first quake to eruption.First estimations show this is 10 times larger than the 2004 eruption.”

There were some expectations that the next eruption at Grimsfjall/Grimsvotn would be stronger, due to increased bulging inflation in the area, but the powerful explosion and ash plume reaching as high as 25 km, caught many out, the ModernSurvivalBlog writes.

A curious observation followed the initial quake swarm and eruption. Once the magma reaches the surface, the quakes typically stop.

With Grimsfjall/Grimsvotn, another earthquake swarm persisted to the east. 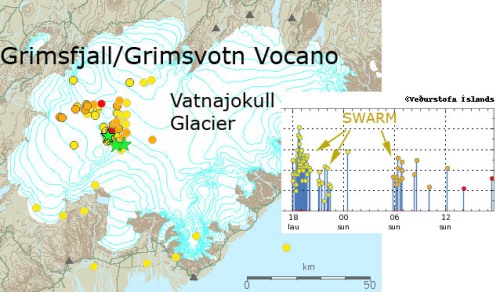 There is also renewed earthquake activity to the south, at the Katla volcano region, which itself is a time-bomb waiting to unleash its fury.

Locally, the immediate threat is ash-fall, which this time is of a heavy consistency.

Threats of glacial water flooding persist due to the intense volcanic heat melting the ice.

One year ago, much of European air traffic was shut down for 6 days from another Icelandic volcano that blew its top (Eyjafjallajokull), leaving countless stranded travelers and a dent in the economy.

Magnus Tumi Gudmundsson, Professor of Geophysics at the University of Iceland, says:

“We see some signs that the power is declining a bit, but it is still quite powerful,” adding that the eruption was the most violent at the volcano since 1873.

The potential disruption during the upcoming week will depend on the atmospheric wind patterns, and the ongoing strength of the eruption itself.

Comments Off on Iceland: Volcanic Update

Volcano Ash Can Send The Earth Into "Deep Freeze"

According to scientists, a major volcano eruption in Iceland might cause the temperatures all over Europe and in the northern parts of USA to drop dramatically. At the moment experts fear another eruption at the nearby volcano, Katla. When Katla went of last time, in the 1700’s, it sent the whole world into an extended deep freeze.

“Depending on a new eruption, Katla could cause some serious weather changes.”

“We are confident economists around the world are working furiously to estimate the GDP impact on the euro zone as a result of this material outlier,” Zero Hedge writes.

“First Easter, next Cesar Chavez day, now it is only logical that natural earth processes will be used to blame for the failings of Keynesianism,” the blogger adds.

EuroControl have issued the chart below witch forecast the ash cloud’s path over the next hours.

“Expect ongoing interruptions for the next four or five days,” Teitur Atlason, at the Icelandic meteorological office, says in a telephone interview with Bloomberg News, Saturday.

“The eruption is still in full swing, and the volcano is spewing pretty dark ashes as high into the air as 5 to 6 kilometers.”

“The jet stream winds, which extend from 10,000 feet up to 40,000 feet, show no signs of change through Wednesday,” Accuweather says in a statement.

“Any ash plume that is released from the Eyjafjall volcano in Iceland will continue to threaten northern Europe and the British isles.”

May Continue For Years

“The current in the height the ashes are reaching remains a strong northwesterly wind, which blows the ashes to Scotland and South Scandinavia,” Atlason of the Icelandic Met Office says.

“Once the ashes reach those places other more complex wind systems take over, which spread the ashes across North and Central Europe. This will continue until Wednesday.”

But the volcanic eruptions may continue for months, curtailing European air traffic when the ash reaches the region, according to geophysicist  Sigrun Hreinsdottir at the University of Iceland in Reykjavik.

“From what we’ve seen, it could erupt, pause for a few weeks, and then possibly erupt again.”

The last eruption of Eyjafjallajökull in December 1821 continued until January 1823.

“We really don’t know if this eruption is going to last as long as the previous one, but we can’t say it’s not a possibility,” Gudrun Larsen, a vulcanologist at the University of Iceland says.

What few medias have reported so far, is the fact that the scientist have been afraid of a major volcano eruption in Iceland for a long time.

Original photo of Katla erupting in 1918

But their focus has not been on Eyjafjall who started it’s eruption about four weeks ago, but on it’s more nosier neighbor Katla.

If lava flowing from Eyjafjallajokull melts the glaciers that hold down the top of Katla, then Katla could blow its top, pumping gigantic amounts of ash into the atmosphere.

Scientists say history has proven that whenever the Eyjafjallajokull volcano erupts, Katla always follows – the only question is how soon.

“When Katla went off in the 1700’s, the USA suffered a very cold winter,” says Gary Hufford, a scientist with the Alaska Region of the National Weather Service.

“To the point, the Mississippi River froze just north of New Orleans and the East Coast, especially New England, had an extremely cold winter.

“If Eyjafjallajokull continues to belch, then you worry,” Hufford says in an interview published on Marsh 25th at ScienceFair/USAToday.

“Depending on a new eruption, Katla could cause some serious weather changes.”

What’s key in having volcanic eruptions affect the weather is both the duration of the eruption, and how high the ash gets blasted into the stratosphere, according to Hufford.

For example, he says, Mount Pinatubo pumped ash for two days in 1991, and spewed it 70,000 feet into the stratosphere.

This dropped temperatures worldwide about four degrees for about a year.

“When volcanic ash reaches the stratosphere, it remains for a long time,” Hufford explains.

As Climate War Intensifies, So Does Extreme Weather

World May Not Be Warming, Scientists Says