Last Sunday’s cyber attack on US Federal Reserve Bank of St.Louis appears to be a lot more serious than the St.Louis FED have told the media, the authorities  and  financial institutions they serve. According to ZDNet the hacktivist group Anonymous may have released important banking information that could be connected to Federal Reserve computers, including contact information and cell phone numbers for U.S. bank Presidents, Vice Presidents, COO’s Branch Managers, VP’s and more. The FBI has now opened a criminal investigation into  hacking incident.

“As an information security expert, its my official position that there was a blatant and irresponsible lack of tact and urgency in the response by the Federal Reserve to the individuals and institutions contained in this list. I’d go as far as to say they have irrevocably LIED to their constituents here.” 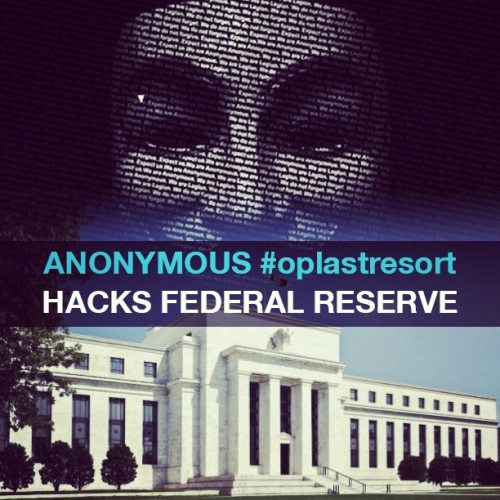 The emergency contact system (ECS) enables agencies to establish two-way communications channels with institutions during a crisis to exchange critical information; crises such as natural or man-made disasters; weather, fire, and so on, chemical biological events or threats, and events affecting the financial markets

One of the people who express his concern with the hacking incident is Veracode chief technology officer, Chris Wysopal, calling the hack “a spearphishing bonanza and the most valuable account dump by quality I have seen in a while.”

Another person expressing concern on the incident is Jon Waldman, a senior information security consultant whose firm specializes in serving small-to-medium sized financial institutions, explain his anger at The FED’s downplaying of the incident.

Here are some quotes by the security excerpts:

“The Federal Reserve is simply incorrect by saying there’s not account details on the list. I’ve seen that list and it is absolutely rife with account details. Usernames and hashed passwords are included with salts.”

“As an information security expert, its my official position that there was a blatant and irresponsible lack of tact and urgency in the response by the Federal Reserve to the individuals and institutions contained in this list. I’d go as far as to say they have irrevocably LIED to their constituents here.”

ZDNet points out that the Anonymous previously hacked other US government websites, including the U.S. Sentencing Commission and the Alabama Criminal Justice Information Center. The report also claim that Anonymous new attack’s filename refers to Christopher Dorner, an ex-LAPD officer that is currently the target of a California state-wide manhunt for killing three people, but has been characterized by some Anons as “an avatar” of the man of conscience pushed to the point of desperate action due to the alleged corruption happening within the LAPD.

However, the latest government hacking incident may also be attributed to a group of Anonymous’ demand for a US computer crime reform law, as well as the group’s extended show-off in protest for the early demise of Reddit’s co-founder Aaron Swartz, a famous hacktivist who committed suicide during a rough investigation by the FBI into his activities.

I certainly hope that no one commits suicide as a result of this new FBI investigation, but I curious about the results. And also if the investigation will target the officials at St.Louis FED – or just the Anonymous…