According to a report by Ulrika Lomas of Tax-News.com, the French Senate, with its left-wing majority, has approved plans to establish a tax on automated transactions in France, to curb the rapid rise in high frequency trading.

“This form of trading merely serves to derail the markets and lamented the lack of visibility for both investors and issuers and the lack of contribution to the country’s real economy.”

Proposed by general budget rapporteur Nicole Bricq, the tax had been adopted by the Senate finance committee recently, highfrequencytrading911.com writes.

The new initiative proposes to impose from January 1, 2012, a tax on certain investment service providers in cases where daily cancellation rates for orders for buying and selling financial instruments on public markets exceed 50%.

Bricq warns that this form of trading “merely serves to derail the markets and lamented the lack of visibility for both investors and issuers and the lack of contribution to the country’s real economy.”

Commenting on its decision to back the plans at the time, the Senate finance committee pointed to the “flash crash” stock market crash of May 6, 2010 in the US and to the stock market crash in Europe in August of this year, which, it argued, served to fuel the controversy surrounding both the impact and the usefulness of high frequency trading.

And the controversy continues….

Chaos in Financial Markets are “Potentially Dangerous for Humanity”

You don’t say! What I find most surprising, however, is that there actually IS a Centre for the Study of Capital Market Dysfunctionality: It was founded in 2007 by British Paul Woolley, after working several years as a stock broker, and as economist and adviser at the International Monetary Fund (IMF). Guess he knows what he’s talking about. In an interview with Spiegel Online, Britain’s new found financial guru, Dr Paul Woolley says the market stress in not only dangerous for those who work there, but also for everyone else. And he has some investment advise.

“Stop paying performance fees to managers who increase the worth of funds because it encourages gambling.”

“The developments in recent weeks have made it quite clear that the markets don’t function properly. Things are spinning out of control and are potentially dangerous for society. Only a fraternity of academic high priests connected to the finance markets is still speaking of efficient markets. Still each market participant is pursuing their own selfish interests. The market isn’t reaching equilibrium — it’s falling into chaos,” Dr. Paul Woolley says.

Here are some more highlights from the Spiegel interview:

“The finance sector can – and is – growing until it overwhelms the economy. In good years the US finance industry cashes in on more than 40 percent of all corporate profits.”

“Most fund managers follow only the newest trends and strengthen them by doing so. In the short term that leads to success, but in the long term it leads to a crash. “

“The finance industry is characterized by many innovations. Because the customers hardly understand their innovative products, banks make amazing returns. “

“The big investors are in a position to force their service providers, the banks, fund managers and bankers into better behavior. “

” Big investors should also insist that trading take place on a public market. “

After several years of practical experience in a firm of stockbrokers, latterly as a partner in his firm, he studied Economics at the University of York (UK) receiving BA (1970) and D Phil (1976).

He held the Esmée Fairbairn Lectureship in Finance at York 1970-76, also serving as Specialist Advisor to the House of Lords Committee on the EEC 1975-6.

He then moved to the International Monetary Fund 1976-83, initially as an Economist and later as Advisor and then head of the Division responsible to the Fund’s borrowing and investment activities.

Returning to the UK, he was for four years a Partner and Director on the main board of merchant bank, Baring Brothers and its various subsidiaries.

In 1987 he co-founded, and was Managing Director of, GMO Woolley, the London affiliate of GMO, the Boston-based fund management firm. He was a Partner and served on the main GMO board (1998 – 2003).

He retired as Chairman of GMO Europe in 2006.

He returned to academic life in 2007, funding the Paul Woolley Centre for the Study of Capital Market Dysfunctionality at the London School of Economics.

He is now also Chairman of the Advisory Board for the Centre and a full-time member of the research team.

Similar centres have been set up at the University of Toulouse and at UTS in Sydney.

Mr. Woolley is an Honorary Professor of the University of York, Senior Fellow at LSE and an Adjunct Professor at UTS.

Read the full interview with Dr. Woolley at Spiegel ONLINE.

The OTC investments in gold papers decreased for the fourth quarter in a row during the three first months of 2011, the latest report from World Gold Council show. Investments in gold EFT’s and similar products fell by 56 tonnes in Q1, equaling a net outflow from the funds of more than USD 2,5 billion.

Notably, EFT’s listed in the US and the UK markets experienced net redemption in the first quarter.

In spite of a fresh all-time-high for the gold price, the capital flow in the markets for ETF’s, and similar gold related investment products, is negative the first time in two years. The outflow in Q1 is almost as big as the inflow in Q4 2011.

But the gold market works in mysterious ways, so what’s actually going on is kinda hard to say.

One thing is for sure, the central banks are buying gold as never before.

But besides Japan, no one is selling.

In the open market, that is.

Most of the trading is done in the non-transparent OTC market.

Well, your guess is as good as mine. This is what the World Gold Council wrote in their April Gold Investment Digest report:

While OTC markets are the deepest and most liquid markets in the world, information about transactions is not always fully accessible to the public as they are conducted outside of regulated exchanges.

However, evidence suggests that trading volumes in the global gold market is quite large; in-line with or larger than trading of other high-quality assets such as sovereign debt.

The London Bullion Market Association (LBMA), through surveys of its members, estimates that the daily net amount of gold that was transferred between accounts in 2010 averaged USD 22 billion (based on the average 2010 gold price).

However, in practice, trading volumes between the bullion banks are significantly higher.

Most banks estimate that actual daily turnover is at least three times that amount and could be up to ten times higher.

During the first quarter of 2011, figures from the LBMA show that activity in the OTC market mirrored that of ETFs and futures.

Volumes rose during the January consolidation to an 8-month high of US$26.1bn/day before subsiding in February as prices recovered. Assuming a continuation of this pattern, indications from ETF and futures markets are that OTC volumes picked up again in March as gold prices maintained their
steady climb, the WGC wrote in last months report. 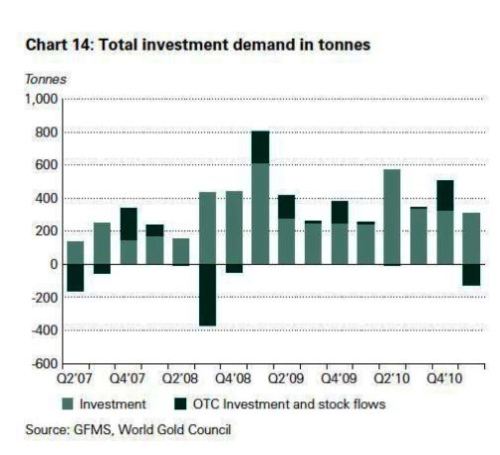 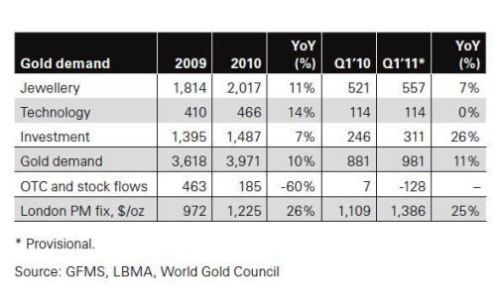 The April report seem, in fact, more interesting now, after the release of the May report.

Activity in the ETF options market remains robust, which continues to offer alternative strategies for investors. The majority of the volume in these products is still being transacted by way of GLD options. In line with some of the outflows experienced in the ETF market during the quarter, GLD options volumes dropped in Q1 2011 on a quarter-on-quarter basis. However, at an average daily volume of 234,724 contracts during the first quarter, trading volumes remain higher than the daily average of 208,131 contracts during the whole of 2010. In general, call option volumes remained higher than put volumes during the period. Similarly, open interest on call options accounted for the majority of traded contracts, at an average of 2.1 million contracts in Q1, compared to 1.7 million put contracts. However, open interest in call options fell further relative to Q4 2010 than the open interest in puts, as investors likely exercised some of those calls as the price of gold fell in the early part of the year.

And here’s some of the most interesting charts from today’s release, Gold Market Trends, May 2011.