If You Can’t Kill the Internet by DDoS, Try An Axe

It’s said to be more than 500 ways to kill a cat. How many ways there is to kill the Internet is yet to be determined, but some people seems very keen to find out:  Reuters reports, Thursday, that the Egyptian coastguard have intercepted a fishing boat off the coast of Alexandria and arrested three men in the act of trying to cut through the SEA-ME-WE 4 undersea cable. The cable is one of the main Internet connections between Asia and Europe, transporting 1,28 terabytes of data.

“Multiple sub sea cable cuts have been confirmed off the northern coast of Egypt in the Mediterranean Sea, which are impacting a number of cable systems in Africa, Middle East and Asia connecting to Europe,”

The Internet does not live in anything resembling a cloud (yet). Instead it resides in hundreds of cables snaking underground and along the bottom of the sea, where it is susceptible to ship anchors, marine life, and sabotage. That’s exactly the kind of attack that seems to be underway. The past week we have seen reports of several severed cables off the coast of Egypt.

According to Reuters, the Egyptian coastguard intercepted a fishing boat off the coast of Alexandria and arrested three men trying to cut through the SEA-ME-WE 4 undersea cable, yesterday. The cable is one of the main connections between Asia and Europe, running from France to Malaysia and linking Italy, north Africa, the middle east and south Asia.

The men are at the moment being interrogated by Egyptian authorities. Their identities are still unknown.

The Egyptian navy have  uploaded their pictures on Facebook, so if you recognize any of them, please notify the authorities via this link.

Over the past week there has been several reports of severed cables off near the coast of Egypt that are part of Seacom, a network of cables serving much of Africa.

Seacom officials have up to now suspected careless ships. But the arrest of the three men yesterday suggests there could a concerted effort to take down Egypt’s connectivity. 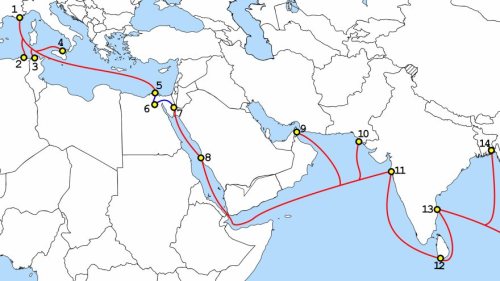 A similar spate of cuts affected the region in 2008, though no culprit was officially established.

Most big countries have several redundant cables landing on their shores. But the loss of even a single one means that all the traffic must be jammed through remaining connections, causing congestion. And there is nothing to stop determined attackers from targeting several cables.

Many cables go through geographic chokepoints like the Suez, and it wouldn’t be difficult to disrupt a whole bunch of connections for a period of time.

Yesterday’s attacks on the Internet’s infrastructure – the Cyberbunker attack and the Egyptian cable cutters – show two ways of waging asymmetric war in the Internet era.

If your aim is a single company, it helps to know how to wrangle thousands of zombie computers into a precise, targeted attack. That also has the benefit of allowing regular users—and the attackers themselves—to stay online.

But if your target is bigger, say a country or a continent, all it takes to cripple the network is scuba gear and a few sharp-edged tools, qz.com writes.

In other words: If you see someone lurking around with a snorkel and an axe – call the police !

Ms. Caroline Atkinson, Director of the External Relations Department at the International Monetary Fund (IMF), made the following comments in response to questions on Egypt during the IMF’s regular press briefing Thursday:

“The Egyptian authorities had indicated that they had expected to have a financing need of some $10-12 billion from now through June 2012 from the international community. They’ve approached bilateral and multilateral partners, including the IMF, to provide the financial support for what is their home-grown program. We expect that an IMF team will visit Cairo shortly to begin discussions with the Egyptian authorities on an arrangement. The size and scope of Fund support will be defined as discussions progress.”

Here’s the transcript of of the press briefing.

By the end of the upcoming week it may be clear if is the next Euro country to join the bailed-outs, (Greece and Ireland).  Portugal is reported to be under pressure – just as Ireland was – to accept a bailout package within the coming weeks, and the outcome of Friday’s EU meeting could decide whether it will join the European bailout camp or not.

“An impending rate rise from the European Central Bank won’t make its refinancing task any easier.” 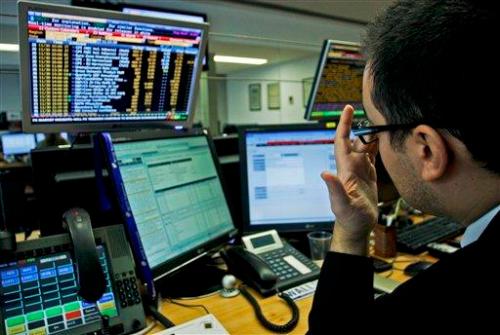 Expectations amongst market participants are high before the important EU meetings on March 11,  and particularly; March 24, The hope is that the EU leaders finally will come up with an EFSF that fits the  purpose, and address the underlying solvency issues of the euro zone. However, these hopes seem to have dwindled over the last two weeks due to Germany hardening its stance.

Investors are all too aware that the European sovereign debt crisis is far from resolved:

Sovereign spreads tightened earlier this year after the ECB intervened in the government bond market. But the improvement was also driven by hopes that the EU was finally becoming less reactive in its approach to tackling the crisis, according to last weeks market summary by Markit Credit Research.

“Portugal is thought to be under pressure to accept a bailout in the coming weeks. An impending rate rise from the ECB won’t make its refinancing task any easier. The outcome of next Friday’s meeting could decide whether it joins Greece and Ireland in the bailout camp,” analyst Gavan Nolan at Markit writes.

However, Libya, Middle-Eeast and rising oil prices are likely to disturb the shaky markets even more in the near future.

Oil, who has been the cause of several recessions during the last 40 years, still has had a significant bearing on trading sentiment

Right now there is two conflicting forces vying for influence over the credit markets, Nolan points out.

“The price of crude has fluctuated between $112 and $118 a barrel in response to events in the Middle East and North Africa. Libya appears to in the early stages of a civil war, with today being called a “Friday of Freedom” by anti-Gaddafi protesters. Government forces have launched counter-attacks on the rebels, and the air force have launched an offensive against Brega, home to Libya’s second-largest largest hydrocarbons centre. Oil supply has been seriously curtailed and this has placed upward pressure on the oil price,” he writes.

“But the pressure is relieved by a belief that Saudi Arabia can and will step into the breach. Saudi has by far the largest reserves in the world and there is no question that it can fulfil this role if necessary. However, Saudi has its own problems, not least the Shia/Sunni strife in its smaller neighbour Bahrain. This has the potential to spill over into Saudi, where 10%-15% of the population is Shia. There is talk of a “Marshall Plan” in the Gulf Cooperation Council (GCC) states. Whether this would be enough to stave off the unrest spreading through the region remains to be seen,” Nolan concludes.

But the influence of oil was somehow offset last week by other economic news.

Data release after data release has pointed towards a brisk pace of growth for the developed economies.

Leading indicators for the manufacturing and services sectors on both sides of the Atlantic provided further indications, and Friday’s US non-farm payrolls, where 192,000 jobs were added, seems to confirm the picture.

The two forces of rising oil prices and growing economies cancelled each other and left spreads more or less flat on the week, according to Markit Financial Information.

But the Markit iTraxx Europe at 99.5 basis points is still about 16 bp’s wider than the Markit CDX IG – a basis that opened up in Q2 2010 and expanded through the second-half of the year.

“The reason for the difference will play a major part in shaping spread direction over the coming months,” Gavan Nolan writes.

Here’s the calender for economic data releases in the week to come.