The Danish and Finnish representations to the EU were evacuated by Belgian police on Monday morning, following a vague bomb threat, received by email during the night.

“It was just normal procedures, nothing spectacular.“ 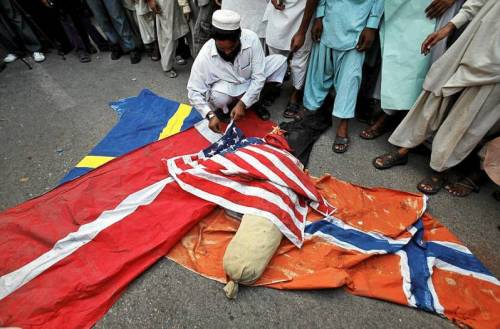 The email threat, which was “not very concrete” according to a Danish EU diplomat, “didn’t seem very serious, but we didn’t want to take any risks.”

“It was just normal procedures, nothing spectacular. We were told by police to leave the building, around half past eight, waited around for about two hours until they swept the premises and then were allowed back in,” says Aulikki Repo, a press officer with the Finnish representation.

Their building, which shares an interior courtyard and a garage with the Danish representation to the EU, was evacuated after Danish diplomats alerted Brussels police about an email received late Sunday night, the EUobserver reports.

The official also denied any links between the email and the start of a trial in Chicago on Monday, in which a Pakistani-born doctor, Tahawwur Rana is charged with helping another Pakistani-American, David Headley, with planning a bomb attack against the Danish newspaper Jyllands Posten.

The paper has become a target for radical Muslims after it published cartoons with the prophet Mohammed.

“The threat was not linked to anything specific happening today,” the Danish diplomat said.

Denmark will also chair the rotating EU presidency in the first half of 2012, but the email did not mention this either.

Some 100 people work in the Finnish representation and another 78 people in the Danish one. Many of them were however in another location – the EU council’s Justus Lipsius building where experts and diplomats from EU member states gather every day for technical meetings.

In addition, a foreign affairs council with the Danish and Finnish ministers is also taking place there on Monday, meaning that only administrative and junior level staff had to be evacuated in the morning.

A massive police presence and bomb experts sealed off a large area in Copenhagen Friday afternoon, after a man tried to detonate a suicide bomb in a hotel toilet. However, the man, with one artificial leg, failed to blow him self up and was seen running from the place with minor injuries and blood in his face.

“The major barriers suggest that the police are worried that there are may be more explosions in the area.”

Bomb at Hotel Jørgensen in Copenhagen.

According to several danish media, a man tried to blow himself up at the hotel in the center of Copenhagen Friday afternoon. He then fled into a park nearby park where he immediately after was arrested by the police. The area is still sealed off as of 6pm CET.

Nearly three hours after the explosion the hotel in Copenhagen is the Ørstedsparken area sill sealed off.

The man behind the suicide attack have at this time not been brought out of the park.

Two cars with army bomb experts and several police officers continue to work in a corner of the park, the news agency Ritzau reports.

According to pictures of the arrested man, published at eb.dk, he seems to have had a belt-like object around his stomach.

Norwegian NRK reports of a loud “explosion like” sound coming from the park, presumably from a controlled detonation of the explosive device.

But this has yet to be confirmed.

Heavy barriers have been raised at critical places in the area, suggesting that the police fears there might be more bombs, or bombers on the loose.

According to the police, there are several objects that are subject to investigation.

The episode provides an extra pressure on the afternoon traffic out of the Danish capital.

Danish police have not yet ruled on whether this is a terrorist act, or not.

The detainee is rumored to be from Luxembourg or Holland.

According to Danish TV2 News, the man only have one leg and one prosthetic.

It is not known what the motive for the suicide bombing might have been, but the hotel is just a few hundred meters from the high-traffic subway station at Nordre Gade – regarded as one of the preferred targets for possible terrorists.

Moreover, tomorrow is 9th anniversary of the terrorist attack in New York on the 11th September 2001.

Norway’s al-Queda: A Chinese Muslim, Some Baking Soda and Puff! There Goes Privacy…

Goldman Sachs seem to have found a new wonder-boy, and perhaps a heir to chief economist Jan Hatzius, in its new Europe analyst Erik Nielsen. At least he got style, a sense  of humor and is just as crazy about soccer as most Europeans. He also show some profound insight on the diversified European economy. Here’s Mr. Nielsen’s thoughts on Europe on a fine Saturday evening in Chiswick.

“With no particular reference to Denmark’s fine victory this evening, I am just wondering what European football would look like had it not been for the smaller countries.”

“With no particular reference to Denmark’s fine victory this evening, I am just wondering what European football would look like had it not been for the smaller countries – be it Denmark, the Netherlands, Switzerland, or Serbia … Its certainly difficult to see much hope in England, France, Spain or Italy – or in Germany after that last performance.”

Away from football, these are my thoughts on Europe on this fine evening in Chiswick:

• We are through another week of good real-economy data releases and (grudgingly) improving markets.

• The EFSF has been formally established. Along with the Commission’s and IMF money, I think it’s a serious defence mechanism which ought to help further stabilise markets.

• Stress tests for the banking system will be published next month. Good, because that’s what the market demands, but I worry we might be heading into a disappointment because markets might expect testing against extreme tail-end risks considered as absurd by policymakers.

• The ECB has now bought €47bn worth of sovereign debt – still peanuts in any reasonable comparison, but I think they may be looking to wind down the purchases once the EFSF is up and running in July.

• The IMF spoke this past week on Greece (okay with program); Spain (happy with policy reforms); and France (marginally critical on fiscal – too polite).

• G20 meeting this coming week; I wonder if the heat will turn on Germany now that China has announced a re-introduction of some FX flexibility.

• We are heading into PMI-week in the Euro-zone; we are looking for slight improvements.

• The UK will see the government’s emergency budget on Tuesday; big budget cuts on their way.

• The Swiss National Bank will publish its May balance sheet this week confirming their huge FX-interventions.

• In Sweden we’ll get the key KI/NIER economic tendency survey on Wednesday. It’s already at its highest level since August 2007, but we remain shamelessly optimistic.

• The central banks in Norway, Hungary and the Czech Republic will all meet this week to consider their interest rates; we expect all three to leave rates unchanged.

• The IMF arrives back in Ukraine on Monday for a week’s talk on how to restart the program. We do not expect agreement this week.

Here’s a copy of the detailed analysis, provided by Zero Hedge.

Pressure On Spain To Cut More

EU Deficit Increased By14 Billion Euro In First Quarter Of 2010