How on Earth can people put a price on something like Facebook? It isn’t even a company – it’s some kind of hybrid-corporation! In fact, if we would look at Facebook the same way we look at all other public listed companies, the face value of the Facebook shares would be zero. The shareholders have nothing to say when it comes to managing the company. The advertizing isn’t going that great, either. So why is the stocks trading at nearly  50 times estimated earnings? Well, investors are starting to turn away from Facebook, too…

“This may be the start of an ongoing trend.”

Social media alternatives to Facebook are increasing as users discover more networks that fit their needs. Financial Times reported a couple of days ago that investors are turning to alternative social media networks, and that Facebook is no longer at the top of the list.Benchmark Capital and Greylock Partners are two recent examples of companies that are branching out beyond Facebook. MarketWatch reports that Facebook lost 1.4 million users in December, and that this may be the start of an ongoing trend.

So, will it turn out that Facebook is just another hype, after all? 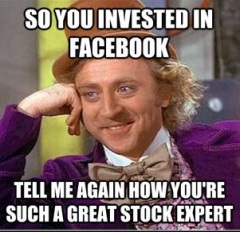 That is, of course, too early to say, but let’s have a look at some of the stuff that’s been reported about Mr.Zuckerberg and his gigantic Facebook lately.

Bloomberg reported on Feb. 12 that David Sze, who was an early investor in Facebook andLinkedIn, has decided to support the startup Nextdoor. And the Financial Times lists Nextdoor and Snapshot as two recent competitors.

But also other networks, that  have been available for several years, and are now seeing growth among their users.

Orkut, Google’s social network, has 33 million users around the world and is still one of the most popular networks in Brazil and India.

Zorpia, founded in 2003 by Jeffrey Ng, has grown to 26 million users while expanding its features to include photo albums and online journals in addition to social networking.

Badoo has grown to 121 million users and has reached 180 countries.

It seems clear that the gap between alternative networks and Facebook is beginning to get smaller – and investors are noticing this.

Although Facebook is not disappearing and will continue to attract users, its growth in certain markets is being stalled.

Facebook is still banned in China and other countries. Despite the ability of some users to get past the block, the ban has allowed alternative social media networks to flourish. Facebook is apparently slowly beginning to lose users. Facebook lost 1.4 million users in December, according to MarketWatch. And this may be the start of an ongoing trend, the financial web site says.