European Crisis Not Contagious – Banks Are

The International Monetary Fund (IMF) have released a stack of reports and papers over the last couple of days, including the one stating that the Greek bailout operation has been more or less – a fiasco, so far. But there’s more: New research indicates that the international banking  is continuously increasing their risk taking and that more any more trouble with the European banks may have severe spillover effects on  financial institutions outside Europe,

“Both German and French banks mostly transmit/receive shocks to other European banks, especially in the UK. French and U. banks pre-crisis also appear to have strong spillover to Russia. Outside of Europe, spillover are largely confined to the US.” 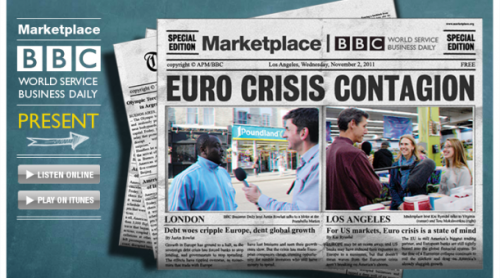 The average sensitivity to European risk, specifically, has been steadily rising since 2008. Banks that are reliant on wholesale funding, have weaker capital levels and low valuations, and higher exposures to crisis countries are found to be the most vulnerable to shocks. The analysis of bank-to-bank linkages suggests that any globalization of the euro area crisis is likely to be channelled through UK. and US banks, the research paper says.

The report “Risk Exposures and Financial spillover in Tranquil and Crisis Times: Bank-Level Evidence” provided by Hélène Poirson and Jochen Schmittmann was released yesterday in the shadow of IMF’s Greek audit report.

This report is not necessary reflecting the official IMF view, but provides some interesting details on who will influence who if more trouble occur.

The researchers have discovered a clear pattern of interconnectedness between European banks.

“French and German banks co-move strongly only with selected US financial institutions, while UK banks are connected strongly with both Asia (pre-crisis only) and the US (in both periods).”

“This last finding suggests that the estimated spillover effects capture pure risk transmission across banks (contagion) rather than shared sensitivities to macro-financial variables.”

“This last finding suggests that the estimated spillover effects capture pure risk transmission across banks (contagion) rather than shared sensitivities to macro-financial variables.”

Moreover, the researchers have mapped the connections between the individual institutions.

“The estimation framework allows us to highlight the presence of “clusters” of interconnected banks that tend to co-move together more strongly than with other banks, either due to inter-bank linkages (counterparty relationships, interbank-lending) or the exposure to common vulnerabilities.”

“Similar to German banks, the spillover of French banks to other regions are largely limited to U.S. financial institutions and can only be detected since the onset of the subprime crisis.”

“The financial spillover of U.K. banks, by contrast, reach beyond Europe in both periods. Pre-crisis, there is empirical evidence of strong co-movement of US, Indian and Chinese banks with U.K. banks; during the subprime crisis and post-crisis, spillover to U.S. banks are dominant and the analysis does not detect any co-movement with banks in other regions.”

“In summary, we can tentatively conclude from the analysis of bank-level spillover that direct financial spillover from the EA banking and sovereign debt crisis transmitted through the equity markets outside of Europe are likely to be confined to US banks and financial institutions. Indirectly, however, given the role of the US as a global financial hub, such spillover – if they were to intensify – could potentially transmit more widely to systemic banks in other regions (Asia, Latin America, and Middle East).”

“The analysis in this study leaves unspecified the channels of transmission of financial spillover both within countries and across borders. While this undertaking is beyond the scope of this paper, it would be an important avenue for further research.” 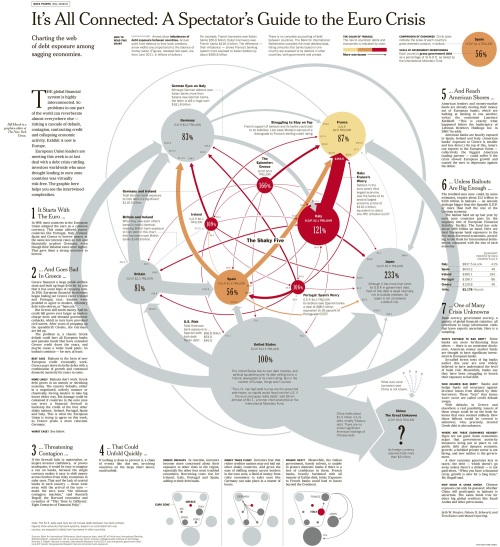 If You Can’t Kill the Internet by DDoS, Try An Axe

It’s said to be more than 500 ways to kill a cat. How many ways there is to kill the Internet is yet to be determined, but some people seems very keen to find out:  Reuters reports, Thursday, that the Egyptian coastguard have intercepted a fishing boat off the coast of Alexandria and arrested three men in the act of trying to cut through the SEA-ME-WE 4 undersea cable. The cable is one of the main Internet connections between Asia and Europe, transporting 1,28 terabytes of data.

“Multiple sub sea cable cuts have been confirmed off the northern coast of Egypt in the Mediterranean Sea, which are impacting a number of cable systems in Africa, Middle East and Asia connecting to Europe,”

The Internet does not live in anything resembling a cloud (yet). Instead it resides in hundreds of cables snaking underground and along the bottom of the sea, where it is susceptible to ship anchors, marine life, and sabotage. That’s exactly the kind of attack that seems to be underway. The past week we have seen reports of several severed cables off the coast of Egypt.

According to Reuters, the Egyptian coastguard intercepted a fishing boat off the coast of Alexandria and arrested three men trying to cut through the SEA-ME-WE 4 undersea cable, yesterday. The cable is one of the main connections between Asia and Europe, running from France to Malaysia and linking Italy, north Africa, the middle east and south Asia.

The men are at the moment being interrogated by Egyptian authorities. Their identities are still unknown.

The Egyptian navy have  uploaded their pictures on Facebook, so if you recognize any of them, please notify the authorities via this link.

Over the past week there has been several reports of severed cables off near the coast of Egypt that are part of Seacom, a network of cables serving much of Africa.

Seacom officials have up to now suspected careless ships. But the arrest of the three men yesterday suggests there could a concerted effort to take down Egypt’s connectivity.

A similar spate of cuts affected the region in 2008, though no culprit was officially established.

Most big countries have several redundant cables landing on their shores. But the loss of even a single one means that all the traffic must be jammed through remaining connections, causing congestion. And there is nothing to stop determined attackers from targeting several cables.

Many cables go through geographic chokepoints like the Suez, and it wouldn’t be difficult to disrupt a whole bunch of connections for a period of time.

Yesterday’s attacks on the Internet’s infrastructure – the Cyberbunker attack and the Egyptian cable cutters – show two ways of waging asymmetric war in the Internet era.

If your aim is a single company, it helps to know how to wrangle thousands of zombie computers into a precise, targeted attack. That also has the benefit of allowing regular users—and the attackers themselves—to stay online.

But if your target is bigger, say a country or a continent, all it takes to cripple the network is scuba gear and a few sharp-edged tools, qz.com writes.

In other words: If you see someone lurking around with a snorkel and an axe – call the police !

Deutsche Bank announced on Tuesday that it is conducting a strategic review of its global Asset Management division. All strategic options are being considered, the bank says in a press release.

“The outcome of this review will be driven first and foremost by our fiduciary duty to, and the interests of, our clients.”

This is one of those interesting press releases where the most interesting stuff is what the releasing company is NOT saying.

When any company is reviewing the strategy of a whole division it is almost certain that there will be some changes.

Deutsche Bank do not say anything in today’s press release about what part of the asset management it will cut lose.

But the largest bank of Europe emphasize what it will keep:

“While the Bank remains committed to asset management, this review is part of the Bank’s continual effort to maintain an optimal business mix and be among the market leaders in each of its businesses.,” DB writes.

“All strategic options are being considered. The review covers all of the Asset Management division globally except for the DWS franchise in Germany, Europe and Asia, which the Bank has already determined is a core part of its retail offering in those markets.”

According to the bank is the strategic review of the asset management division focusing in particular on how recent regulatory changes and associated costs and changes in the competitive landscape are impacting the business and its growth prospects on a bank platform.

Kevin Parker, Global Head of Asset Management and a member of the Deutsche Bank Group Executive Committee, says in commentary:

“The outcome of this review will be driven first and foremost by our fiduciary duty to, and the interests of, our clients. Our aim is to find the best strategic option to maximize the performance and potential of the Asset Management division.”

Fiduciary duty? I had to look it up:

“A fiduciary duty is a legal or ethical relationship of confidence or trust between two or more parties. One party, for example a corporate trust company or the trust department of a bank, acts in a fiduciary capacity to one, who for example has funds entrusted to it for investment. In a fiduciary relationship, one person, in a position of vulnerability, justifiably vests confidence, good faith, reliance and trust in another whose aid, advice or protection is sought in some matter. In such a relation good conscience requires the fiduciary to act at all times for the sole benefit and interest of the one who trusts,” according to Wikipedia.

“A fiduciary duty is the highest standard of care at either equity or law. A fiduciary is expected to be extremely loyal to the person to whom he owes the duty (the “principal“): he must not put his personal interests before the duty, and must not profit from his position as a fiduciary, unless the principal consents.”

Now, who is “the principal” (or “principals”) of Deutsche Bank? I wonder…