The strongest solar storm since 2003 started last Monday – a wave of charged particles from an intense solar flare eruption is now raising alerts about airline flights and satellite operations. The solar flares did not make a direct hit on the Earth, but several flights were rerouted last week and scientists are not sure if there will be more to come.

“The chance for re-intensification is still possible because this active spot on the sun that created the initial havoc could go off again.” 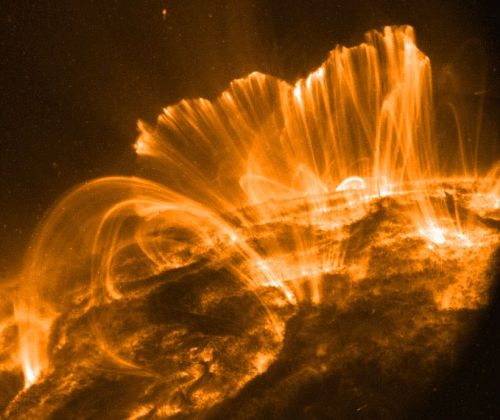 The storm began when a powerful solar flare erupted on the sun Monday, blasting a stream of charged particles toward our planet. This electromagnetic burst — called a coronal mass ejection, or CME — started hitting Earth somewhere around 10 a.m. ET Tuesday, according to the National Oceanic and Atmospheric Administration’s Space Weather Prediction Center.

Experts at the center says that solar radiation levels were at their highest point since the Halloween storms of 2003.

Earlier estimates ranked the storm as the strongest since 2005 in terms of solar radiation, but Terry Onsager, a physicist at the Space Weather Prediction Center, said that when the wave of charged particles arrived, “that took it from below the 2005 event to above the 2005 event,” msnbc.com reports.

Bill Murtagh, the center’s program coordinator, said that the outburst was forcing airlines to change routes for some of their scheduled flights. “Most of the major airlines flying polar [routes], or even some non-polar, high-altitude routes, have taken action to mitigate the effect of this storm,” he says.

Delta Air Lines reported that it altered routes for “a handful” of flights, and that the changes added about 15 minutes to travel times.

Delta spokesman Anthony Black told Reuters that solar activity “can impact your ability to communicate … so basically, the polar routes are being flown further south than normal.”

United Airlines says one flight was diverted on Monday, while American Airlines says it has seen no operational impact from the storm so far but was monitoring the situation.

As powerful as it is, the storm should have no effect on daily life for most people, msnbc.com writes.

When a coronal mass ejection hits Earth, it can trigger potentially harmful geomagnetic storms as the charged particles shower down the planet’s magnetic field lines.

This can amp up normal displays of Earth’s auroras (also known as the northern and southern lights), but a strong CME aimed directly at Earth can also cause disruptions to satellites in orbit, as well as power grids and communications infrastructures on the ground.

Monday’s solar flare set off an extremely fast-moving CME, but the ejected cloud of plasma and charged particles was not directly aimed at Earth and hit the planet at an angle instead.

This glancing blow would likely lessen any impacts on Earth,

“Earth’s magnetic field served as a shield, and pretty much shielded the radiation so that it doesn’t penetrate that deep,” Yihua Zheng, a lead researcher at NASA’s Goddard Space Flight Center says.

Data from these spacecraft were combined to help scientists create models to calculate when and where the CME was going to hit Earth.

“A CME is kind of like a space hurricane,” Zheng says. “You have to predict how it will form and evolve. From the models, we can see which spacecraft will be in its path, and what will be impacted.”

At the Space Weather Center, scientists reported that the CME began interacting with Earth’s magnetic field at 9:31 a.m. ET. “We predicted it would arrive at 9:18 a.m., and in reality, it arrived at 9:31 a.m., so ours has a 13-minute error,” Zheng adds. “Usually for this kind of model, the average error is seven hours, so this is the best case.”

At NOAA’s Space Weather Prediction Center they say the level of solar radiation should gradually subside — unless the sun unleashes another big coronal mass ejection. “The expectation is that it will weaken and that it will decay over the next couple of days,” NOAA representatives told msnbc.com.

The University of New Hampshire’s astrophysicist Harlan Spence says “the chance for re-intensification is still possible because this active spot on the sun that created the initial havoc could go off again.”

The solar flare associated with this week’s storm was estimated to be an M9-class eruption, which placed it teetering on the edge of being an X-class flare, the most powerful type of solar storm. M-class sun storms are powerful but midrange, while C-class flares are weaker.

The flare erupted from sunspot 1402, a region near the meridian of the sun that has been active for a while now, according to NASA.

The powerful solar storm could be signaling that the sun is waking up after an extended period of relative dormancy.

The sun’s activity waxes and wanes on an 11-year cycle.

The star is currently in the midst of Solar Cycle 24, and activity is expected to continue ramping up toward the solar maximum in 2013.